After 15 years and 10 CD’s as guitarist, producer and composer for the German Heavy Metal institution RAGE and with hits penned by him like “Down”, “Soundchaser”, “War of Worlds”, “Straight to Hell” (well-known from the German blockbuster movie “Manitou’s Shoe”), “Carved in Stone”, “Forever Dead”, “Empty Hollow” and “Cleansed by Fire”, Victor Smolski now continues his musical career with his new group ALMANAC.

The guitar virtuoso’s composition “Suite Lingua Mortis”, released first on the successful 2006 RAGE record “Speak Of The Dead”, built the Classical foundation for the new, more versatile yet even playful LINGUA MORTIS ORCHESTRA sound and their LMO release in 2013, which scored a big success by outselling all most recent RAGE releases and charted in Germany at #24 on the official album charts.

This successful story now continues with ALMANAC who add a powerful touch of heaviness to LMO’s unique sound. For all the members of ALMANAC the debut album is a new, exciting, and very interesting chapter that has now begun. Melodic power metal in conjunction with classical orchestra and modern sound are making ALMANAC an absolute listening experience.

ALMANAC recorded their second longplayer entitled »Kingslayer« at HeyDay Studios in Wuppertal, Germany, which has been released on November 24th 2017 via Nuclear Blast. Even there was hard christmas competition, »Kingslayer« reached position 71 at the Viva charts. ALMANAC has played a headliner tour in Russia just for release of »Kingslayer«.

He can say that again; after having spent one year on the road with this current line-up, playing everything from packed clubs to huge arenas, ALMANAC return usually bombastic and refined, yet surprisingly heavy, fast and aggressive. With more than 30 years in the world of heavy metal under his belt, Smolski of course has long established his signature style you instantly recognize – throbbing riffs, bombastic orchestration, versatile vocals. More than ever before, however, the third album is marrying the bandwidth between symphonic grandeur and choking impact. Almanac never sounded that heavy, that gripping, that precise.

They’ve never been this dynamic before, either: “Rush of Death” is a split album whose mid-section is dedicated to “Suite Lingua Mortis Part 2”, a direct sequel to the much revered metal-meets-orchestra spectacle found on RAGE's “Speak of the Devil” (2006). Listening to ALMANAC going all in with the Inspector Symphony Orchestra and the Ensemble Virtuoso will enchant Smolski fans and avid RAGE followers alike. Simply no other metal band working with a huge orchestra manages to pull off such a direct and organic sound.

“Rush of Death” is not only the heaviest ALMANAC album yet; it's also the most contemporary. After a stint in Russian history and his gruesome hymns on murdered kings, Smolski is turning to the gladiators: The orchestrally driven mid-part is all about Ancient Rome's fabled fighters, the rest of the songs about their modern counterparts – racing drivers. “While the audience is getting one hell of a show, the drivers fight for life and death,” he says. “I am a racing driver for more than 25 years. I know what I'm talking about.”

Metal and a need for speed are his ultimate combination, backed up by a personal story; among lots of triumphs, Smolski was vice champion of the Division Supercars at the German Rallycross Championship 2018/2019, is 17-times class winner on the Nürburgring, Hockenheimring and Spa-Francorchamps and soldiered through the 24-hour race on Nürburgring a stunning 14 times. “I risked my life plenty of times, always asking myself afterwards how utterly idiotic I am. But adrenaline changes the way you think. When I put on my helmet, I am entering another world. The start button of my car is my reset button.”

Emotions rather similar to those behind the steering wheel take hold of him as soon as he enters a stage. “I entirely succumb to this energy, to this world. I am in the here and now, precisely in this very moment. Life behind the wheel and life on stage,” he says, “are equally intense.” His third record is finally uniting his two biggest passions. And both only follow one agenda: Pedal to the metal!
ALMANAC new album "Rush Of Death" includes a bonus DVD and has been released on March 6th, 2020

Victor Smolskis new band, ALMANAC, has released their debut album called »TSAR« on March 18th, 2016 via Nuclear Blast Records. Victor Smolski himself was responsible for the production of the record. Mixing was done by Sebastian "Seeb" Levermann (ORDEN OGAN). 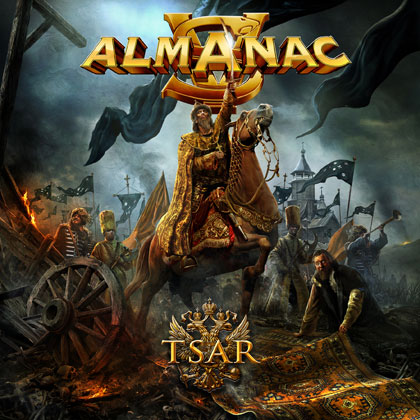 The tracklist of »TSAR« racks up as follows:

Mastermind Smolski commented on it: "»TSAR« is the absolute best of and the highlight in my musical career. I had never so much fun during producing a CD. Incredible teamwork and a hundred per cent merciless. Push the pedal to the metal!"

For all the members of ALMANAC, »TSAR« is a new, exciting, and very interesting chapter. Traditional power metal in conjunction with bombastic orchestra sound and world music with a modern sound all make ALMANAC a compelling and absolute listening experience. The Belarus-born guitarist Smolski is joined by the Orquestra Barcelona Filharmonia.

Fans with an interest in deeper subjects including history and culture will also be able to dive into a new world with »Tsar«, which combines historic and modern parallels that will surprise many. From the warlike nomadic horsemen in the steppes of Russia, to the tsardom, Ivan the Terrible, warlike Cossacks who dominate the Tatar, the siege of Constantinople and the Mongol invasion are stories about battles, wars, intrigue, conquest, terror, power and love that can be heard vocally using the different styles of the singer's voices.

After 15 years and 10 CD's as guitarist, producer and composer for the German Heavy Metal institution RAGE and with hits penned by him like "Down", "Soundchaser", "War of Worlds", "Straight to Hell" (well-known from the German blockbuster movie "Manitou's Shoe"), "Carved in Stone", "Forever Dead", "Empty Hollow" and "Cleansed by Fire", he now continues his musical career with his new group ALMANAC. The guitar virtuoso's composition "Suite Lingua Mortis", released first on the successful 2006 RAGE record "Speak Of The Dead", built the Classical foundation for the new, more versatile yet even playful LINGUA MORTIS ORCHESTRA sound and their LMO release in 2013 which scored a big success by outselling all most recent RAGE releases and charted in Germany at #24 on the official album charts. In comparison to RAGE, LMO offered fresh song material entirely composed by Smolski, a new musical concept combining Heavy Metal with Classical music, songs written especially for band & orchestra plus several male and female singers sharing the lead vocal job.

This successful story now continues with ALMANAC who add a powerful touch of heaviness to LMO's unique sound. The Belarus-born guitarist with this new group is joined by former LMO band members Jeannette Marchewka (vocals), the "Orquestra Barcelona Filharmonia" with Enric Garcia on keyboards. New members are Armin Alic on bass and Michael Kolar on drums. The two singers David Readman (PINK CREAM 69) and Andy B. Franck (BRAINSTORM) complete the line-up on »TSAR« production.

NUCLEAR BLAST is proud to announce, that ALMANAC's debut album »Tsar« has entered the charts at the following positions: Germany #74, Swiss #87 Congratulations, guys!! 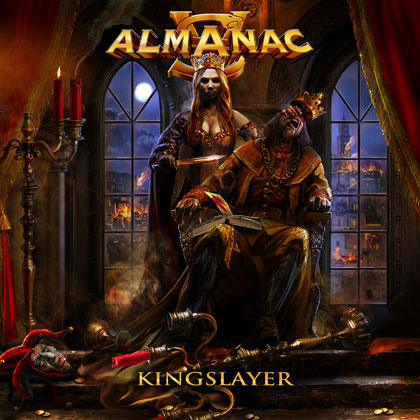 The tracklist of »Kingslayer« racks up as follows:

ALMANAC - the new band of Victor Smolski (ex-RAGE) - stands for a new dimension of symphonic power metal, featuring three singers Jeannette Marchewka (LINGUA MORTIS ORCHESTRA), Andy B. Franck (BRAINSTORM) and David Readman (PINK CREAM 69).
In March 2016, ALMANAC unleashed their highly acclaimed debut album »Tsar«, which entered the official charts in both, Germany (#74) and Switzerland (#87), followed by a European tour along with ORDEN OGAN, as well as their own headliner tour in spring 2017.

ALMANAC recorded their second longplayer entitled »Kingslayer« at HeyDay Studios in Wuppertal, Germany. "Our second strike is done," reveals guitar player Victor Smolski and explains, that "»Kingslayer« is the logical follow-up to »Tsar«, just more compact, heavier and faster. Our previous live experiences could be perfectly permitted during the recordings. The band got closer and well attuned, you can feel this unified energy within the new tracks. We took a lot of time and gave our very best. »Kingslayer« is a crafted metal album with a lively power sound!".

»Kingslayer« has been released on November 24th via Nuclear Blast, reaching position 71 at the Viva charts, even there was hard christmas competition. The cover artwork was once again created by Hungarian artist Gyula Havancsák (ACCEPT, DESTRUCTION a.o.).

In July, ALMANAC played at the 'Masters of Rock' festival, where they presented the first two new tracks live, 'Losing My Mind' and 'Children Of The Sacred Path'. The concert is part of the bonus live DVD, which has come along with the limited first edition of »Kingslayer«.

ALMANAC has played a headliner tour in Russia just for release of »Kingslayer«, planning a Europe tour in 2018.

Victor Smolski's ALMANAC are pleased to announce the next piece of big news for the band – that their third studio album "Rush Of Death" will be released on 06.03.2020 via Nuclear Blast. 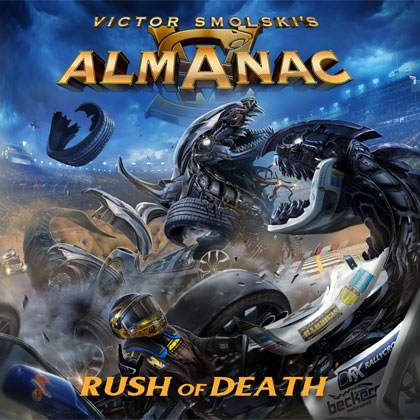 The tracklist of »Rush Of Death« racks up as follows:

Victor has made a statement regarding the news:

"The new ALMANAC line-up has been working out very well indeed, and following on from our latest headline tour and festival run in Germany, the Czech Republic, Russia and Korea, it seemed the perfect time to enter the studio.

I spent a lot of time on the song writing and I contemplated a lot on what has influenced my style throughout my thirty plus year career. There’s the hard riffing in tracks like "Unity" and "Soundchaser" of RAGE, bombastic orchestration in "Suite Lingua Mortis", plus the versatile vocal parts and crazy solos in Lingua Mortis Orchestra.

You can find all these influences on the new ALMANAC album "Rush Of Death", which some people might find surprisingly heavy.It is a very guitar-intensive record which consists of two parts: one half with energetic metal songs without orchestration, and the other half (no less harder!) contains an epic "Suite Lingua Mortis Part 2" recorded with the same symphony orchestra as the original Part 1 of "Speak Of The Dead" by RAGE. Album guests Frank Beck of GAMMA RAY and Marcel Junker have enriched the vocals with their versatile range of singing.

Lyrically, we’ve remained true to ourselves and have researched the history thoroughly. As an adrenaline junkie, I found that the theme of “gladiators” has tied in very well with the songs, but this time, we transferred the issue to the present - portraying racing drivers as modern gladiators. I’m very familiar with the dangers of being behind the steering wheel: with eleven 24 hour Nürburgring races under my belt, including various victories, but also fails, I have already fought many hard fights. We as a band also took ourselves to the limit in the studio, staying true to the motto: "pedal to the metal!"

ALMANAC won’t be resting on their laurels with live shows either – they’re set to present tracks from "Rush Of Death" to fans in spring 2020, when the band joins the Finnish Horror Metal maniacs LORDI on their European tour.

Get socialized with me